Audio Version of the Mueller Report

"The Mueller Report: The Findings of the Special Counsel Investigation" by Robert S. Mueller III, Special Counsel's Office U.S. Department of Justice is one of the most important and consequential documents of the modern era. Thanks to Audible, as long as you have an Amazon account, you can listen to the report for free (all eighteen hours of it).

There is also an Audible version of the Mueller Report provided by the Washington Post that's available for purchase, and includes exclusive analysis by their Pulitzer Prize winning staff.

If you prefer to listen to the report on SoundCloud, it is also available there (thanks to Mike Schaefer for the link).

To read along, you can download a PDF version of the redacted report at the US Department of Justice website. 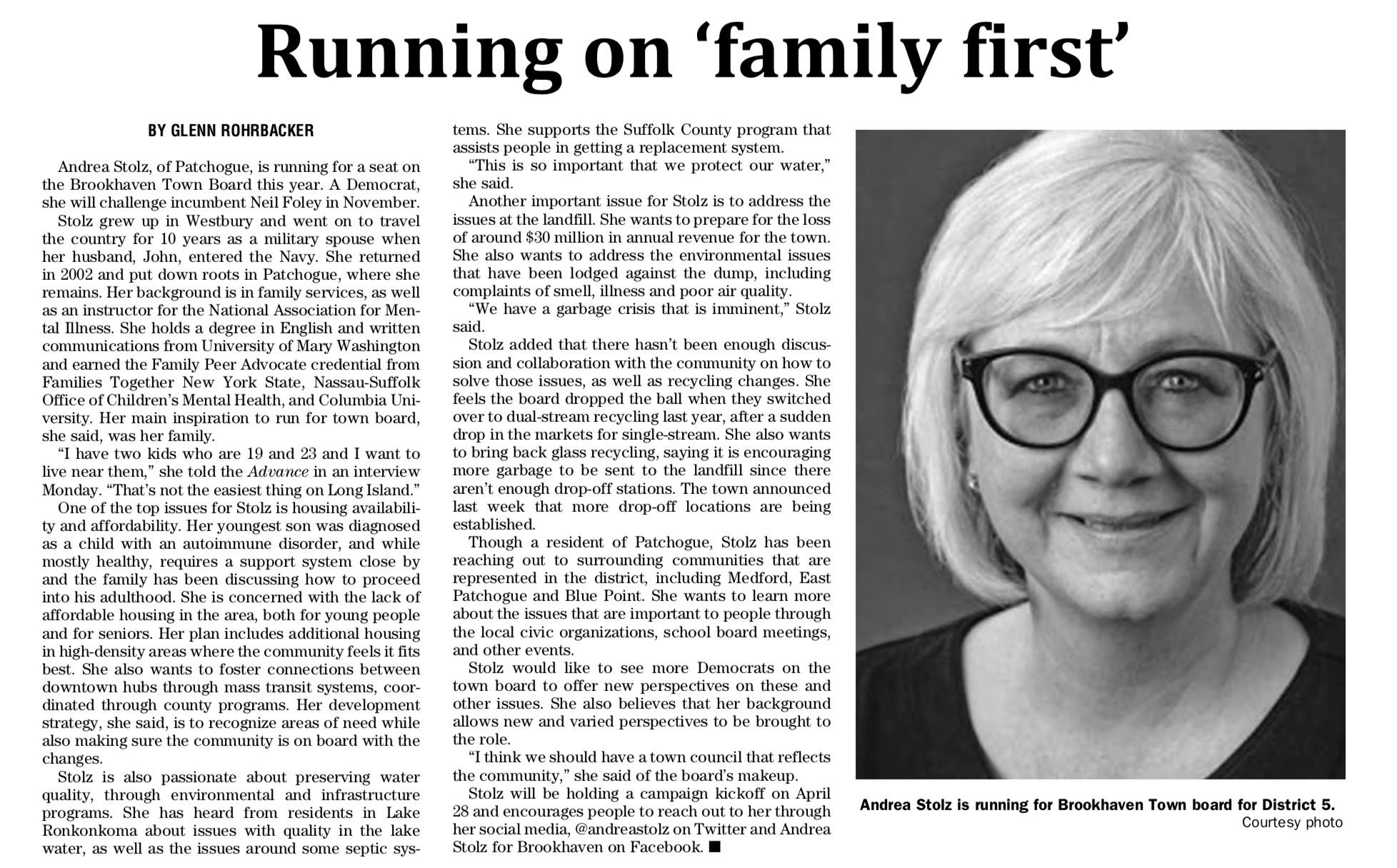 Our Stance on Proposal 1

Proposal 1 is a proposition appearing on the 2018 election ballot for all Brookhaven voters.

It would amend the Town Code of Brookhaven to establish a term limit of three (3) four-year terms for Brookhaven Town elected officials, and extend the term of office for those officials from two (2) years to four (4) years, beginning on January 1, 2020.

With little more than two weeks’ notice the Republican-dominated Brookhaven Town Board put the resolution for this referendum on the calendar at a Town meeting on August 2nd, 2018.

When the town meeting was held, the residents who did show up to speak in opposition to this referendum were shouted at and bullied.

What the Board members said:

Every single member of the Town Council was re-elected with more than 60% of the vote, except for one. (Some of them routinely win with over 75% of the vote). On average, they raise $60,000. Campaigning is an important part of our democratic process, and they want to avoid going to the voters.

Brookhaven is the only town in Suffolk County with a Councilmanic or “Ward” system. All other towns with four year terms ARE NOT. NY State’s Town Law Sec. 85 is very clear in that two-year term lengths are required for elected officials under a Ward system.

BROOKHAVEN ALREADY HAS TERM LIMITS ON THE BOOK! It was passed by referendum in 2003. The Solicitor General has concluded that two-year term lengths are mandatory for a Ward system of governance under state law.

This is an attempt to calcify Republican domination over Brookhaven government. There are some council members who have already served 12 years. This measure would re-set the clock, allowing them to stay in office as long as they want, making it THEIR choice, not ours.

Check out this Maddow segment featuring some interesting tidbits about Lee Zeldin and his campaign.

EDIT: Video has been removed from YouTube. You can find details about Zeldin's "misprinted" flyers at Salon.com in this article.

Get Out The Vote Rally with Gershon, Swalwell, and Bellone

Join us at Perry Gershon's Farmingville Office this Saturday for a Get Out The Vote Rally with Congressional Candidate Perry Gershon, Congressman Eric Swalwell, and Suffolk County Executive Steve Bellone! 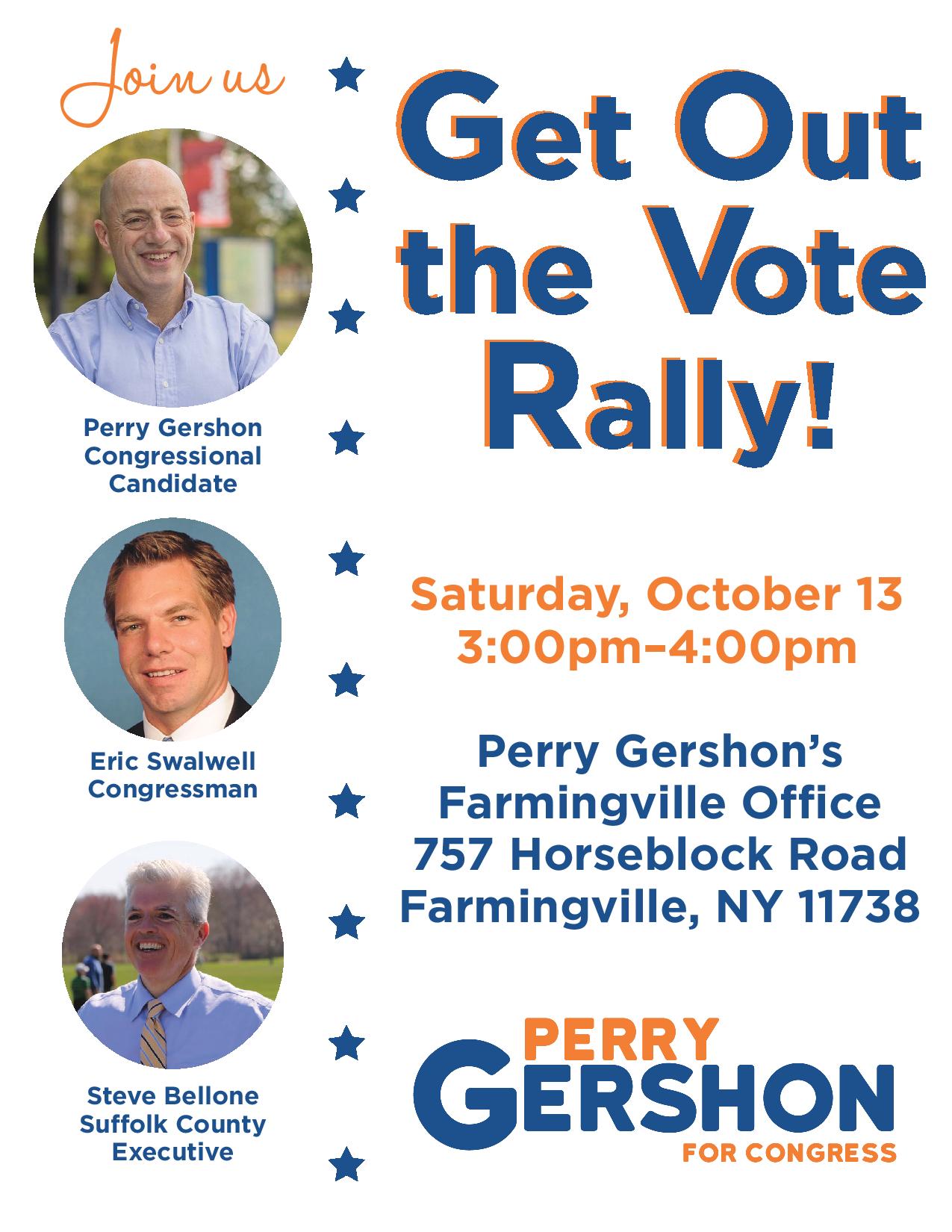 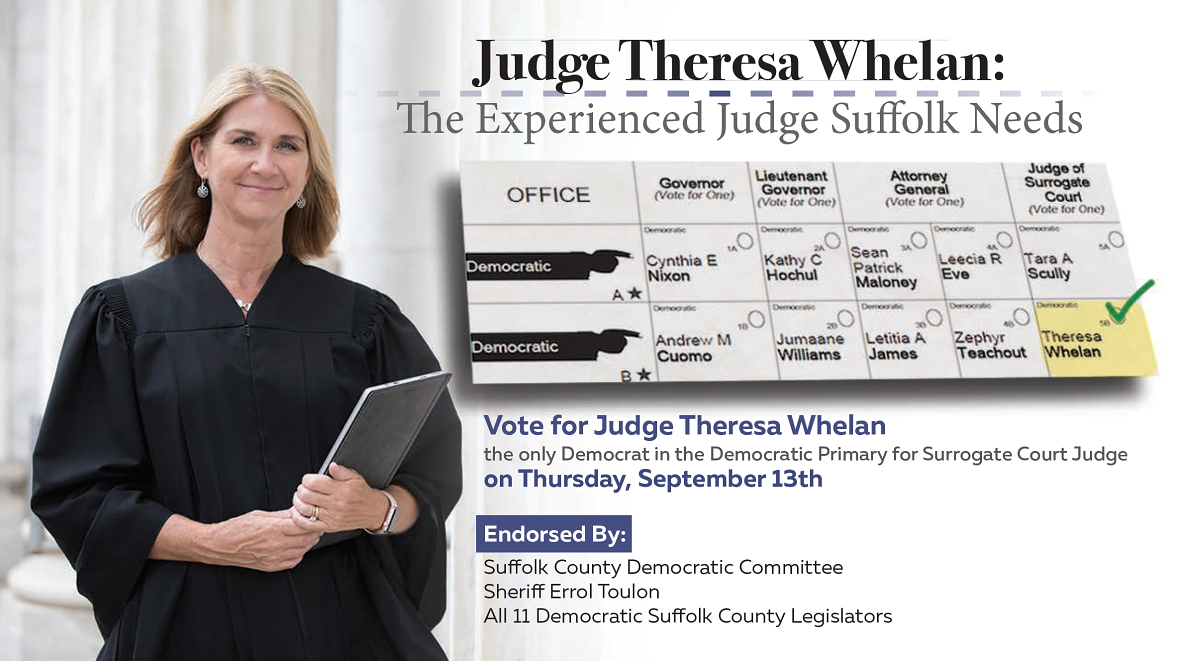 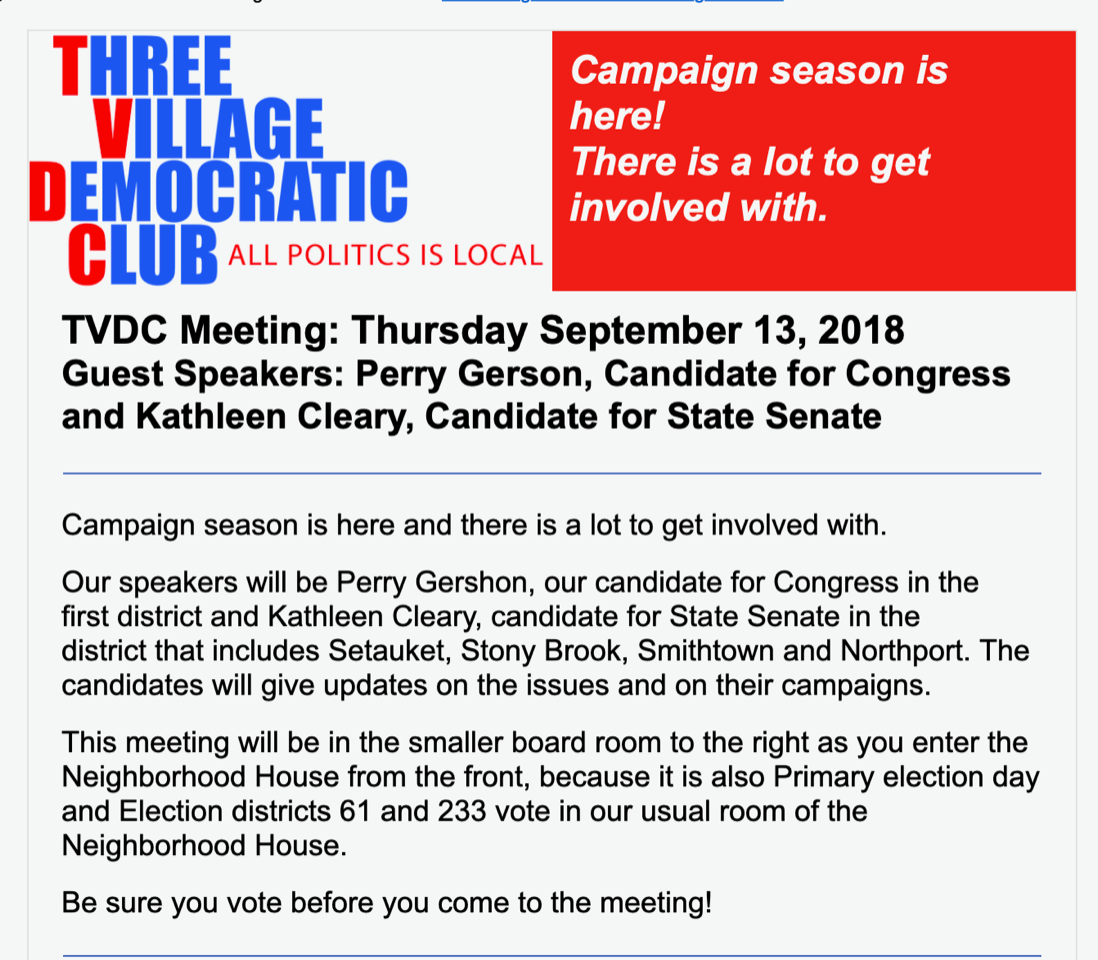 The Executive Board of the Brookhaven Town Democratic Committee has overwhelmingly endorsed Judge Theresa Whelan for Suffolk Surrogate Judge.

“Theresa Whelan is a life-long Democrat. She has served on the bench for ten years and is the only truly qualified candidate to serve as surrogate judge,” said Brookhaven Democratic Chair Lillian Clayman.

“To run a Republican in a Democratic primary is an all-out assault on our party and the values that we stand for,” Clayman said. “We will be waging a campaign against this attempt to hijack our party by the Republicans. It’s dirty tricks, plain and simple.”

Longtime Democratic activist and First Council District Leader Barry McCoy said, "It is outrageous that there are supporters of Tara Scully in the Democratic Party who are attempting to deny the public a choice for the Surrogate court judgeship by supporting a Republican to be a candidate on the Democratic line. Party lines should be restricted to party members.  New York law should be changed to forbid the process of cross endorsement which is a major source of corruption."

Scully, a registered Republican, is challenging Theresa Whelan for the Democratic line in a primary to be held on September 13th.

“As Democrats, we will stand should to shoulder against the Republicans and their enablers who want to destroy our party and what we stand for,” said Clayman.

The following rules are applicable for committee members who will be collecting signatures for petitions.

Many of you have asked about the Ballot Proposals.

Much thanks to Larry Tierney for putting together the information below:

PROPOSAL ONE - VOTE NO 😠
Constitutional Convention - Shall there be a convention to revise the Constitution and amend the same?

This effort for a yes vote is supported by Reclaim NY, an organization funded by Robert Mercer who is Stephen Bannon’s financial backer.

PROPOSAL TWO -  VOTE YES 😀
An amendment allowing the complete or partial forfeiture of a public officer's pension if he or she is convicted of a certain type of felony.

PROPOSAL THREE - VOTE YES😀
An amendment authorizing the Use of Forest Preserve Land for Specified Purposes.

(The NY League of Conservation Voters is a good source. They recommend a Yes Vote - You can google them to see for yourself. They are good at parsing out election propositions written in legalese and translating them into plain English.

Instructions When Voting By Absentee Ballot

When voting, carefully fill in each circle next to all 14 candidates names. Do not write anything on the ballot or it may be disqualified. When you mail back the ballot be sure to sign the OUTSIDE of the supplied envelope where indicated. Put your filled out ballot in that envelope, seal it and put it in the self-addressed envelope supplied. You must add a postage stamp to the outer envelope. The deadline for returning the filled out ballot is that it must be postmarked no later than Monday Nov. 6th, the day before Election Day, Nov.7th.

You can join us using